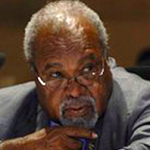 The impasse between factions led by current Prime Minister Peter O’Neill and deposed Prime Minister Sir Michael Somare occurs at the apex of a fragile central state apparatus whose authority is already challenged in many parts of the interior and which is rendered by open conflicts between bureaucratic factions, including divisions within the military and domestic armed forces.

Not only was Sir Michael removed from the Prime Ministership by Mr. O’Neill under unusual circumstances last year (then-PM Somare was on an extended overseas stay receiving medical treatment), but retired and active duty elements of the Papua New Guinea Defence Forces (PNGDF) who support Sir Michael staged a mutiny in January against the O’Neill-backed Defense Chief, Brigadier General Francis Agwi. Compounding the problem is the attempts by Mr. O’Neill to remove Chief Justice Salamo Injia and another judge from the PNG High Court using extraordinary oversight powers conferred to parliament (in which O’Neill is part of the majority), ostensibly for misconduct (misuse of funds) but more likely due to the Justice’s ruling in favor of Mr. Somare’s reinstatement as Prime Minister. 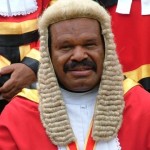 The Supreme Court has ruled that the Judicial Conduct Act passed in March is unconstitutional, but Mr. O’Neill and his supporters have persisted in their attempts to remove Chief Justice Injia. This has led to charges of judicial harassment against Mr. O’Neill. Even so, O’Neill has the backing of most of the civil service as well as a majority in parliament, and has been treated as de facto head of state by foreign governments in spite of the Supreme Court ruling in favor of Sir Michael.

All of this is set against the immediate backdrop of elections scheduled for mid-year but now postponed for six months amid rising tribal and clan tensions and problems with voter enrollment in rural areas (the PNG parliament voted 63-11 in early April to postpone the vote). However, postponing the vote could aggravate tensions to the point that a state of emergency will have to be declared in order to maintain order. O’Neill’s opponents believe that is his plan and that a state of emergency will allow him to consolidate his position while judicial processes and civil liberties are suspended.

Background To The Crisis

The long-term backdrop to the current political crisis is a context of limited state capacity and control. Modern states are, among other key measures, defined by the presence of a institutionalized regulatory framework that includes legal and taxation systems, enforced by a centralized bureaucratic apparatus that provides public goods and services and which enjoys, in its armed component,  monopoly of organized coercion over a given geographic area. Little of this applies to PNG, which has been marked since independence in 1975 by deep social cleavages and collective violence on tribal regional, partisan and economic grounds (the nearly ten year secessionist war in Bougainville cost over 20,000 lives, and in 2009 anti-Chinese rioting claimed dozens more).

The country scores very low on all recognized human development indexes, with high rates of illiteracy, disease (it has the highest rates of AIDS/HIV in the Pacific) and very poor transportation and communications infrastructure. Even so, there have been few interruptions of civilian rule in PNG (the last was in 1997 when then Prime Minister Julius Chan was forced to resign under pressure from the Defence Forces high command over government attempts to recruit foreign mercenaries to intervene in the Bougainville conflict).

Having served previously in that capacity, Sir Michael’s most recent stint as Prime Minister began in 2007 and he was not believed to be seeking re-election in 2012 (in fact, he had announced in 2006 that he would not stand again but then changed his mind due to political circumstances). The current impasse therefore represents a continuation of the often personal as well as tribal nature of PNG politics, although the length of the crisis and the postponement of elections also represent a new and worrying development that raises the possibility of regime collapse or overthrow. Even Mr. O’Neill acknowledges the problem, calling the Supreme Court’s decision to strike down the Judicial Conduct Act evidence of a “constitutional crisis” in the country.

That is an important turn of phrase. States tend to weather political crisis so long as institutional mechanisms exist for conflict resolution. Even if a political crisis expands into a social crisis where mass collective action is seen in the streets, institutionally-grounded regimes can use a mixture of concessions and constraints to keep the situation from flaring into open conflict or civil war. Economic crises deepen the problem, which if left unresolved by institutional means can lead to compound fractures of the state, society and productive apparatus. When that happens the situation, to paraphrase Antonio Gramsci, becomes delicate and dangerous and opens the field to interventions of an extra-constitutional sort. That moment is known as an organic crisis of the state, which leads to state failure.

In PNG two of the three crises that can lead to an organic crisis appear to exist. Although the economy is growing and investment is flowing, political and social cleavages threaten to spill outside the institutional framework.

In PNG two of the three crises that can lead to an organic crisis appear to exist. Although the economy is growing and investment is flowing, political and social cleavages threaten to spill outside the institutional framework. That poses serious questions for the PNG elite as well as foreign stakeholders with regards to the country’s stability.

Foreign Investment – At Risk or Secure?

That brings up the rather unique role of foreign private actors in PNG. In spite of the nearly nine month crisis, credit rating agencies have given the PNG a better rating, at a Standard and Poor B+, than countries such as Portugal or Argentina. The latter have functioning states which however inefficient and bloated have complete legal control over their geographic jurisdiction, unified and professional armed forces, institutionalized regulatory systems, and an absence of pre-modern and modern sectarian conflicts. PNG has none of those attributes and yet is valued as less of an investment risk. The reason has to do with the commodities boom, PNG’s role as a mineral exporter (72 percent of GDP is related to mineral exports), and the strong growth rates that it has exhibited (8 percent in 2010-2011) in spite of its distorted GNP figures and its myriad of social problems. It appears that for credit agencies, insurers and private investors alike, state failure is not a problem that affects foreign investment in the PNG. Even so, the absence of effective state control in many areas of the country, coupled with on-going disputes about land tenure and ownership, have forced private firms to devise alternative means of securing their investments in the country.

The presence and activities of PMCs is becoming increasingly controversial, as they have been implicated in civil rights violations, to include murders, of locals with whom mining and forestry companies have been in conflict.

One of the solutions private firms have found for the problem of securing their investment assets is hiring private security companies (PMCs) for protection while securing preferential investment terms from provincial governments. The presence and activities of PMCs is becoming increasingly controversial, as they have been implicated in civil rights violations, to include murders, of locals with whom mining and forestry companies have been in conflict. Calls for the ouster of foreign PMCs have gained some traction in the PNG parliament, although there is as of yet no state capability to replace them with indigenous police forces.

In the face of the political crisis most of the international community has remained unmoved. The two public exceptions include the reaction of PNG’s long-time colonial master and major aid donor, Australia, which has continued to call for the holding of elections as scheduled in June 2012 and which has promised resources to help in voter registration and election monitoring. This has caused some tensions with the O’Neill government that has forced the Australian government to soft-peddle its differences with the PNG.

The second foreign response has been the creation of the Melanesian Spearhead Group Legion, headquartered in Suva (Fiji). This regional armed force which was proposed, and is mostly staffed, by Fijians is designed for rapid response to domestic unrest and collective violence in Melanesia. Along with the Fijian PMC known as Fiji Defence Logistics (FDL), this force is explicitly charged with dealing with situations much like what could occur in the PNG in the event of state failure. Moreover, Sir Michael is known to enjoy close relations with Commodore Frank Baimimarama, the de facto Prime Minister of Fiji and Chief of its defense forces. It therefore remains an open question as to whether the ongoing political crisis in PNG will elicit calls for external intervention, and if that should occur, whether that intervention will come in the form of a RAMSI-style response led by Australia and New Zealand or if it will be the Legion and FDL that lead the way. That will be determined as much by the desires of the foreign investor community as it is by PNG’s political authorities, something that at this point is difficult to discern.

Summary: The short term outlook for PNG is increased political instability and social unrest, possibly leading to mass violence if elections are postponed indefinitely and/or a state of emergency is declared.