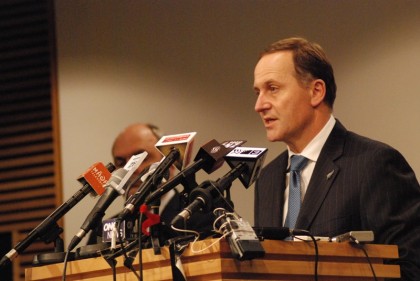 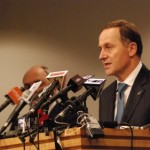 As one of the most conspicuous non-nuclear states in the world, New Zealand has a long history of involvement with non-proliferation and disarmament issues. It is a long-standing member of the International Atomic Energy Association (IAEA) and of the Nuclear Suppliers Group (NSG) and is a signatory to the Non-Proliferation Treaty (NPT).

New Zealand’s stance against French nuclear testing in the South Pacific, and its declaration of non-nuclear status in 1985 are believed to have influenced the French decision to abandon nuclear tests in the 1990s and made New Zealand an icon of the nuclear non-proliferation movement.

Among other recent initiatives, it served as a mediator in the Group of Six talks with North Korea regarding the latter’s nuclear weapons program, which in 2006 helped secure a delay in that program by brokering a “fuel and food for pause” deal in which Japanese fuel and food supplies was exchanged for a six month hiatus on North Korean weapons testing (the North Koreans refused to talk directly with the Japanese or US on the matter, preferring to use New Zealand as an honest interlocutor). Far from being too small to matter, New Zealand’s profile looms large on issues of nuclear non-proliferation and disarmament. 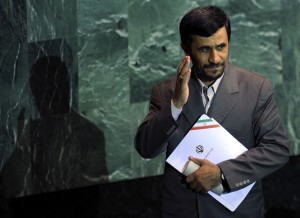 It seems odd that New Zealand has remained relatively silent on the issue of the Iranian nuclear program amid suspicion that Tehran has designs on manufacturing a nuclear weapon.

Given that profile, it seems odd that New Zealand has remained relatively silent on the issue of the Iranian nuclear program and suspicion that Tehran has designs on manufacturing a nuclear weapon. Other than supporting UN resolutions authorizing sanctions on Iran because of its refusal to cooperate with IAEA inspection and transparency demands, New Zealand has offered no alternative proposals nor made any effort to help mediate the ongoing stand-off between Tehran and its Western critics. This occurs in spite of calls for New Zealand to try and reprise with Iran its North Korea mediator role against the backdrop of serious talk about pre-emptive strikes by Israel and/or the US on suspected Iranian nuclear weapons development sites.

There may a  reason for the silence. Unlike the Labour government that preceded it, the current National government has worked hard to reaffirm ties with the United States and Australia on diplomatic and security issues. This has been seen the upgrading of intelligence links between New Zealand and the US after 9/11 and in the 2010 Wellington Declaration that made NZ a first-tier military partner of US.  Less well known is the fact that New Zealand was on the Board of Govenors of the IAEA in 2008-2010 when UNSC resolution 1929/2010 was issued strengthening the sanctions regime against Iran, and that in 2011 a NZ diplomat chaired the annual IAEA conference where further sanctions on Iran were a main topic of the 153 member group. New Zealand was also a decisive swing vote in the NSG decision to authorize enriched uranium exports from Australia to India, a move championed by the US as part of a larger strategic balancing strategy.

For a Western-centric nation, New Zealand has good relations with Iran. It opened its embassy in Tehran in 1975 (during the Shah era), making it the oldest New Zealand embassy in the Middle East (Iran opened an embassy in New Zealand in the 1990s). Iran is NZ’s fourth largest trading partner in the Middle East, with exports to Iran at US$250 million (mostly milk derivatives but also other animal products and manufactured goods) and imports at US$ 120 million (mostly petroleum products as well as figs and dates).

In 2004 the New Zealand/Iran Political and Economic Cooperation Council (PECC) was established, bringing together government and business leaders from both sides to discuss issues of mutual interest. At the time, Foreign Affairs spokesperson Maryanne Hobbs said that it would pave the way for discussion on “political and security” matters. The mention of security is interesting, and presumably would include discussion of nuclear proliferation. Three meetings of the PECC were held, the last in October 2009 in Tehran. That is of note because UNSC 1929 came into effect the next year and no further meetings were held. Since New Zealand is scheduled to host the next PECC meeting, its failure to schedule the event may be a subtle indication by the National government (installed in late 2008) of its displeasure with Iran on the nuclear issue.

New Zealand supports the enrichment of U232 for peaceful purposes… its non-proliferation stance is clearly directed at weapons development rather than at energy production.

There are some additional twists to the possible cooling of New Zealand-Iranian relations. Under National New Zealand has opposed moves in the UN to declare the Middle East a nuclear free zone (such as Latin America). The proposal would seem to be in line with a long-standing New Zealand stance, since the initiative is focused on weapons and excludes civilian energy programs (in fact, New Zealand supports the enrichment of U232 for peaceful purposes, and as a member of the NSG has approved exports of enriched uranium to countries such as India, so its non-proliferation stance is clearly directed at weapons development rather than at energy production). It would therefore appear to be consistent for New Zealand to support the nuclear-free Middle East proposals.

However, that would require Israel to give up its 250 or so nuclear warheads. Although Labour supported the move to make the Middle East nuclear-free , National has reversed that position.  That could indicate that, as part of its re-warmining of relations with the US and Israel (which were strained in 2004 by a passport fraud scandal involving Israeli agents), National does not want to strongly endorse an anti-Israeli position in the UN (since the Middle East nuclear free proposal is as much if not more directed at Israel as it is at Iran). This likely has to do with a restored intelligence sharing relationship with Israel once Labour left government, but it also signals a shift in New Zealand’s position on core proliferation matters. No longer is there a blanket call for nuclear disarmament. Under National, New Zealand’s position has become more selective.

Concerns about an Iranian diplomatic or economic backlash appear to be of little import to New Zealand policy-makers. This may be due in part to the fact that trade with the Sunni Arab world, particularly the Gulf Cooperation Council (GCC, a compact of Saudi Arabia and five smaller Arabian Peninsula states), Egypt, and Turkey is worth about US$2.5 billion, more than ten times the export earnings derived from trade with Iran.  Were Iran to economically retaliate against New Zealand because of its support for the US-led sanctions regime, there would be little relative loss over the long-term given continued trade growth with Sunni Arab partners. Should the embassy be closed and diplomatic relations severed (which is very unlikely), New Zealand would gain stature in the Sunni Arab World. This point is worth noting because it is the Sunni Arab world, and Saudi Arabia in particular, that are the most concerned about Iran acquiring nuclear weapons, Israel notwithstanding. Thus there is a compensatory counter-balance to any negative Iranian reaction short of armed retaliation.

Foreign Minister Murray McCully has said that NZ should consider enacting legislation in order for it to impose unilateral sanctions on countries that violate international norms.

There is more to the apparent shift in New Zealand’s approach to Iran. Foreign Minister Murray McCully has said that NZ should consider enacting legislation in order for it to impose unilateral sanctions on countries that violate international norms. He claims that at present New Zealand can only enforce international sanctions because New Zealand does not have laws in place that allow the government to do so  on its own. Australia has such laws and Mr. McCully referenced them when he said that perhaps New Zealand should consider enacting similar legislation so that on the imposition of sanctions it legally accords more closely with its neighbor.

His remarks are worth pondering. Besides the fact that there is no need to have a specific law passed in order to impose unilateral sanctions (an act of parliament will do, which gives flexibility to governments when enacting and withdrawing sanctions), New Zealand has already unilaterally imposed sanctions on Fiji after the 2006 military coup that deposed the elected civilian government. These sanctions were not in support of any specific multilateral resolution (although Fiji was suspended by the Commonwealth and had development aid suspended by the European Union and Asian Development Bank as a result of the military intervention). Mooting of the point therefore appears to be another signal to Iran (although Mr. McCully said that he had no specific nation in mind). Depending on the language of the law should it eventuate, it also could be a way for the National government to “lock in” New Zealand to the sanctions and compliance regimes of its major security partners even if it loses the 2014 election.

What seems to be at play is a deliberate New Zealand silence regarding the Iranian nuclear program on top of a couple of subtle indicators of displeasure so as to balance Iranian sensitivities with support for the West and the US in particular on the specific issue of Iranian nuclear weapons (the US was the only major country to oppose the Middle East non-nuclear initiative). Putting everything together 36th Parallel sees a stronger pro-US tilt by National after Labour’s attempts at independence and quiet diplomacy vis a vis Iran. What this may mean in the near future is that New Zealand will join any future sanctions regime (Iran has now been disconnected from the SWIFT financial transaction network, which will be crippling to its banking system), and may have to vote in favor of a UNSC resolution authorizing the use of force against Iran in order to prevent it developing a weapons capability. All of this is a significant shift from its long-held stance in the non-proliferation arena.

As the saying goes, when a diplomat says “yes” she means “maybe.” When she says “maybe” she means “no.” And when she says “no”–well, then she is no diplomat. But sometimes silence is a diplomatic way of speaking louder than words. That seems to be the case with New Zealand’s current position on the Iranian nuclear program.

Futures Forecast: At least through 2014 New Zealand will continue to quietly align itself closer with the foreign policy positions of Australia and the US and lessen reliance on multinational forums as the vehicle of first recourse when it comes to non-proliferation and security issues.