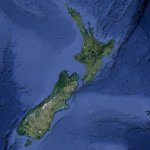 36th Parallel External Report, 14 September 2010 – Paul Buchanan writes that New Zealand’s contemporary foreign policy approach is to straddle the fence between East and West. Economically, New Zealand sees its future rooted in Asia, with China being its primary partner. A dilemma is developing…

In the Melian Dialogue, one of the best known tracts in The History of the Peloponnesian Wars, the Greek historian Thucydides outlines the tragic dilemma confronted by the small island of Melos, which attempted to remain neutral in the conflict between Athens and Sparta. Located close and considered to be a colony by Sparta, vulnerable to sea-born invasion on three sides, Melos was a prime strategic objective for the Athenians.

Yet, even after the Athenian army landed on their shores, the Melians would not relinquish their neutrality in the face of Athenian demands to do so. They eloquently presented practical and principled reasons why their neutrality should be respected. Yet, after protracted negotiations in which the Melians futilely argued the value of their independence, the island was occupied by the Athenian army, its men slaughtered and its women and children enslaved.

The moral of the story is that small states live at the mercy of larger ones and risk alienating the latter at their peril. During periods of large power conflict the tragedy of Melos suggests that it is best to choose a side rather than straddle the fence of neutrality. This is not just a problem for the ancients. In an as of yet anarchic international system in which large states dominate the strategic landscape and which new and old power rivalries wax and wane, with few exceptions the lesson embodied in the Melian Dialogues remains one of the axioms of small state foreign policy to this day.

Melos was a victim of what Machiavelli called fortuna (fate, which refers to circumstances beyond human control and which in social science terms are referred to as independent variables), in the form of its geographic location. No amount of foreign policy virtu (virtue, which is the element of human volition in strategic calculus that is seen as the intervening variable from which outcomes are determined) could save it from that inescapable and ultimately catastrophic fact, which made its principled commitment to neutrality untenable in the face of large state pressure. Conversely, in spite of being blessed with a fortuitous geographic location in terms of the strategic balance between current world powers, New Zealand appears to be heading towards a Melian dilemma of its own making.

New Zealand’s contemporary foreign policy approach, which began to take shape in the early 1990s and has consolidated since 1999, is to straddle the fence between East and West. Economically, New Zealand sees its future rooted in Asia, with China being its primary partner.

Militarily, New Zealand continues to align itself with the West, particularly with Australia, the US and the UK (this in spite of recent military-to-military initiatives between China and New Zealand). Although it pays much lip service to the multilateralism embodied in the UN and has a good record on international service in that regard, it is the two strategic pillars of New Zealand’s foreign policy—trade and security–that are sending it headlong towards a Melian conundrum. That is because it has placed itself squarely in the middle of the emerging strategic competition between the PRC and the US over influence in the Western Pacific basin, a competition that is set to intensify as China moves to assert its status as a global power by extending its economic, diplomatic and military influence into areas previously within the exclusive sphere of US influence.

New Zealand operates as if trade can be separated from military-political affairs. It presumes that it can continue to grow its economic relationship with the Chinese and other Asian states while maintaining robust defense ties with its Western security partners.

This outlook betrays ignorance of the fact that other actors see trade and investment as part of the larger strategic equation, as a power aggregator and influence enhancer, and often as a war substitute or conflict proxy in which interests can be counterpoised without risk of armed violence. Such is the case with the US and China in Southeast Asia and the Western Pacific. Each side is working hard to establish or reaffirm alliance networks in which economic and political-military interests are overlapped and intertwined.

For example, the proposed Transpacific Partnership (TPP), which seeks to expand the P4 trading consortium and various bilateral trade agreements into a Pan-Pacific trade bloc that would include the US, Australia, Chile, Peru, New Zealand, Singapore, Brunei and Vietnam, is a clear case of how geopolitical and economic interests converge in the minds of policy-makers (particularly those in the US). Likewise, China’s attempts to create an Asian regional trading bloc that would rival the TPP and APEC by excluding the US and Taiwan demonstrates that policy-makers in Beijing have also seen the utility of engaging in a holistic approach to trade and political-military affairs.

New Zealand has not done so. Instead, it appears to have a segmented or compartmentalised view of foreign policy in which trade is divorced from security concerns and immediate opportunities outweigh longer term strategic considerations.

It continues to deepen its political and economic ties with China, including allowing Chinese investment in strategic industries, offering permissive immigration terms to Chinese nationals as part of the bilateral trade agreement with the PRC and permitting overt Chinese influence in its domestic political system. For a variety of reasons New Zealand does not extend the same courtesy to US investors even as it attempts to deepen ties with the US on military matters.

Conversely, it takes a pro-US strategic position in the South Pacific while doing virtually nothing to off-set the chequebook diplomacy that has made China the most important trade and investment partner of a number of Pacific island states, to include Fiji. The bottom line is that New Zealand is trying to play nice with two large rivals, making all the right noises in specific areas of mutual interest while seemingly oblivious to the fact that the US and China see their relations with New Zealand in broader and more holistic strategic terms—terms that have set them on a collision course down the road.

As the US-China regional rivalry heats up over the next decade, the current New Zealand position will become increasingly untenable. Whatever their specific nature, US and Chinese ties come with implicit strings attached. This has already been seen in US attaching progress in bilateral trade negotiations to New Zealand’s abandonment of its non-nuclear policy and support for the Iraq War. It has also been seen in China’s conditioning negotiations on deeper trade relations with New Zealand to the latter’s suppression of Falun Gong and other dissident protests against Chinese representatives visiting the archipelago. The gentle pulling of these strings, while minor impediments that have slowed but not stopped the progress of New Zealand’s relations with both giants, occurred in a context and at a time when the rivalry between China and the US was still muted. That will change, and the strings binding New Zealand to each power will be pulled harder in what will amount to an unpleasant tug of war for large power domination of the Antipodes.

In the absence of a more nuanced, long-term and comprehensive foreign policy approach that attempts to bridge or help forestall the widening gap between US and Chinese interests in the Western Pacific, the escalation of the great power rivalry in the region will take its toll on New Zealand’s international position. It will no longer be able play one side against the other for self-interested advantage, at which point it will be forced to choose between them. Whichever way it chooses to align itself, there will be serious repercussions to that decision.

Other small states have begun to prepare for that eventuality. Although Singapore encourages Chinese migration from the mainland in order to ensure the ethnic balance of the island state, and allows Chinese investment in non-strategic industries or with majority Singaporean equity, it has developed a Western-oriented global trading and finance network that insures against Chinese domination of its economy. It has emulated the PRC’s one-party domination of the local political landscape, but it has liberalised the political regime more quickly and embedded itself in a web of US-centred security alliances that discourage aggressive use of Chinese military assets in the South China Sea and Malaccan Straits. The Singaporean strategy towards a potential Melian dilemma is clear: if push comes to shove, Singapore has signalled in word and deed that it will side with the West, something that deflects Chinese pressure and deters potential ultimatums.

It is not a matter of if but of when and how the US-China regional confrontation will happen. There will come a time when the US and China will see their contested relationship with New Zealand in zero-sum terms, and if New Zealand has not prepared for that contingency by formulating a hedging strategy that mitigates the impact of raw power politics on its international position, it will be then that Aotearoa will be confronted with its own Melian dilemma. That will not result in the death of the nation, but it will spell the end of its independent and autonomous role in the global community.