Thursday, December 8, 2022
Home Analysis Assessment Fiji An Icon Of Pacific Constitutional Instability
36th Parallel External Report, 01 November 2006 – Why Fiji’s Army Believes It Has A Right To Overthrow Its Government – Last week, while covering the Forum in Nadi, Fiji, Scoop sought the views of Fijians as to why their military was threatening to over-throw the Fijian government. Should the demands of Fiji’s military commander be taken seriously? All said most definitely.

[google-map-v3 width=”620″ height=”240″ zoom=”12″ maptype=”HYBRID” mapalign=”left” addmarkerlist=”Nadi, Western Division, Fiji{}4-default.png” maptypecontrol=”false” pancontrol=”false” zoomcontrol=”true” scalecontrol=”false” streetviewcontrol=”false” bubbleautopan=”false” showbike=”false” showtraffic=”false” showpanoramio=”false”]
Fiji’s military commander, Voreqe (Frank) Bainimarama, cast a long shadow in the week prior the Pacific Islands Forum. Even though Bainimarama was in the Middle East visiting Royal Fiji Military Force soldiers – and no doubt the hundreds of his former soldiers who had been poached by security companies and now operate as private soldiers in Iraq and Kuwait – his ultimatum drew concerns from both the New Zealand and Australian prime ministers who insisted that their personal security be beefed up while attending the Forum and that a ‘fast escape’ contingency plan be at the ready should soldiers turn up at the Denarau Island Resort where leaders gathered for the Pacific Islands Forum.

When talking to people on Nadi’s streets they, taxi drivers and others, both indigenous Fijians and Fijian Indians, said Bainimarama is serious, that he should be taken at his word, and, what’s more, all said Bainimarama had their support. 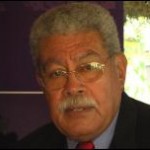 The government had been embarrassed after Bainimarama (on October 16) issued an ultimatum: that Fiji’s Prime Minister Qarase had until November 6 to back off two controversial bills (an indigenous coastal rights bill and a reconciliation bill) or face being run out of office by the Fijian Army.

This week, Qarase met with Fiji’s president, Ratu Josefa Iloilo, and on Tuesday morning Qarase sought a presidential order demanding Bainimarama to stand down as head of the Military. Qarase urged that Bainimarama be replaced by Lt Colonel Meli Saubulinayau.

The news organisation FijiLive reported that Qarase had demanded that if Bainimarama did not stand down then he and his government would resign office. However, the bluff backfired after senior military chiefs refused to carry out the order and demonstrated total support for their commander Bainimarama.

Bainimarama then countered the government’s order stating that Qarase’s government must resign gracefully.

Bainimarama, who was still in Iraq visiting Fijian soldiers based there but scheduled to return to Fiji late this week, told FijiLive the last thing he wanted was violence and that Prime Minister Laisenia Qarase should be held responsible if that were to happen: “Now that they have failed to remove me all that needs to be done is for the Government to resign gracefully. If it does not happen, the military does not want any violence,” he told Fijilive. Bainimarama added that the Qarase government was corrupt: “They have to be removed.”

The exchange resulted in Qarase announcing on Wednesday evening his determination to remain in power: “I declare emphatically that there is absolutely no question of me resigning in response to the current situation, or of my Government stepping down,” said Qarase. However he said he was willing to have further dialogue with the Military to discuss matters of concern. Qarase has called a special meeting of the Great Council of Chiefs to discuss this issue, FijiLive reported.

So what is it about the two proposed bills that has polarised Fiji? First, it would appear many in Fiji believe recent Fiji general elections held in May were rigged.

The military chief wants Qarase to withdraw an indigenous coastal rights bill and also reconciliation legislation which would see the release from prison of those involved with Fiji’s 2000 George Speight-led coup.

The Fiji Times had reported Bainimarama as stating: “At this stage Fiji needs good governance and the military will demand their resignation. There’s nothing illegal about this… We don’t have to take over because the military will walk into the office of the prime minister and demand his resignation. If the people want us to do this, we will do it.”

The drivers said even though a coup would “put Fiji back years” it would be worth it as the coastal rights bill would see anyone, “even criminals and troublesome people” able to wander about on coastal resorts. It would seem tourism operators and those hooked into tourist service businesses are against the bill. Should the bill pass, the men said tourists would end up being robbed and the result would be a severe drop off in tourists to Fiji and more Fijian people out of jobs. The reconciliation bill they said is simply wrong: “Those involved with the Speight coup are criminals. They deserve to be behind bars for what they have done,” one of the drivers said.

For a Kiwi, it’s a weird rationale to fathom. But for these men, whose livelihood is founded on tourism, it is clear; if the government is not working for the people’s and Fiji’s interests, then the Military must intercede.

Sitting back, one wonders if the sentiment is born within the cultural and ideological roots of military tradition in Fiji. As Melbourne-based journalist Nic Maclellan identified in Pacific Journalism Review (September 2006 edition), etched deep within the Fijian observances of lotu (Christianity and Methodism), turagaism (a belief in the chiefly rights to leadership) militarism, and links between masculinity, rugby, religion, and the bati warrior culture in Fiji, can be found explanations for a contemporary acceptance of a military commander asserting his demands on a government that it shape up or be shipped out. For Australians and New Zealanders the existence of a constitutional divide between the operations of the military and that of the executive is more than just an observance, it is an essential ingredient of stable society. But the Fijian drivers say that is fine “but if the government is corrupt, and an election is rigged, then what option remains?”

Almost 15,000 people had earlier signed applications to work in the Middle East. With Fiji offering an unregulated market, private security companies set up branch offices in Suva. Companies like Britain’s Global Risk Strategies began poaching soldiers from the Royal Fiji Military Force. Others included Homeland Securities Limited (a recruiting agency for ArmorGroup), Sabre International Security Fiji Ltd (subsidiary of Britain’s Control Solutions) and Meridian Services Agency – all offered soldiers up to $3000.00 Fijian dollars a month to be private soldiers in Iraq. But as Maclellan’s investigation showed, while thousands signed contracts in Fiji, many found once inside the Middle East promises of big Fiji bucks deflated, and in some cases (as with Global Risk Strategies) were not paid at all.

Despite the scandals surrounding the private security companies, Fiji remains a nation proud of its military heritage. Its soldiers are highly regarded for the work they have done with United Nations peace keeping forces. Many have been recruited and employed by the British Army. For many of these soldiers it is a family tradition going back generations.

On Wednesday FijiLive reported Members of the Fiji military had been asked to resign if they did not support Bainimarama’s stand against the Qarase government.

FijiLive reported: ‘Military spokesman Major Neumi Leweni said that military commander Commodore Voreqe Bainimarama made the call three weeks ago and was re-emphasised at the barracks following Government House’s failed attempt to replace the army chief. “The indications we got yesterday is that everybody was one,” said Leweni. “If anything had come out of this, it has made us much stronger. The moral (sic) is very high. It showed our resolve.”,’ the FijiLive report stated.

Fiji has a total population of 846,085 people, made up of 54 percent indigenous Fijian, 37 percent Fijian Indian, and nine percent all other races. But it may surprise many to realize that support for its military issuing commands to the government spans the ethnic divide. With 12 percent unemployment, and an obvious lack of opportunity for many, discontent with the government, at least on Viti Levu, is rife.

*******
UPDATE: – New Zealand’s Prime Minister, Helen Clark, has called on Commodore Bainimarama to stand aside. Click here for this article.

And a spokesperson for New Zealand foreign affairs minister, Winston Peters, told Scoop: “New Zealand’s government believes that commodore Bainimarama should respect the wishes of the government and stand aside when he returns to Fiji from overseas.

“Fiji’s government was democratically elected – in fact it has been encouraging to see all political parties working together in a multi-party government since the election in May – and it appears to have followed the proper process in attempting to deal with Commodore Bainimarama. So we feel that he should follow the constitution himself and agree to stand aside.

“Our position on the role of the military is well known – it does not have any political role in a democratically-elected government, and in fact it should respect the direction given to it by a democratically elected government. If Commodore Bainimarama does not like what is happening in politics in Fiji then he should leave his post as commander and stand for parliament,” the spokesperson said.

As a close friend and neighbour of Fiji, the New Zealand government is particularly concerned about the risk of considerable damage to Fiji’s economy that a stand-off between the armed forces and the government could have through scaring away tourism and international business. And while it has not followed the Australians’ lead in having naval vessels on stand by “we are ready to react to any changes in the situation at short notice,” the spokesperson said.

“Similarly we continue to monitor the situation viz our travel advisory and while we have not seen fit to warn against tourist travel at this point, we are advising tourists that there is potential for rapid change in the current atmosphere of calm in Fiji and that they should therefore continue checking the Safe Travel website for any updates.”

New Zealand’s Ministry of Foreign Affairs Safe Travel advisory currently states: “Tensions between the Government of Fiji and the Fiji Military Forces continue. Although the situation is currently calm, this could change with little warning. New Zealanders planning to visit Fiji should monitor both the media and this website for updates. In the event of the situation deteriorating, New Zealanders in Fiji are unlikely to be targeted but should take measures to avoid being caught up inadvertently in any violence, including by avoiding demonstrations and large gatherings.”