Last week Fiji took delivery of a shipment of Russian weapons that were “donated” by Russia pursuant to a bilateral Memorandum of Understanding (MOU) signed in February 2015. The Fijians say that the weapons are needed by Fijian peacekeepers in places like the Middle East because what they currently have in their inventory are obsolete. The shipment includes small arms (squad) weapons, two trucks, tear gas, other non-lethal munitions and possibly a helicopter. The shipment will formally be unveiled in February in front of a Russian delegation that will include military trainers who will remain in Fiji to instruct Republic of Fiji Military Forces (RFMF) personnel in their proper usage.

Fijian opposition figures believe that the shipment is illegal because it was not approved by Parliament and that it could be used against domestic opponents of the current, military-backed government. Let me briefly outline the issues.

The shipment is perfectly legal as it is not part of a Treaty that needs parliamentary ratification. Plus, it is a “donation” of military aid so it does not need parliamentary approval.

It is not clear that the formal unveiling will reveal all of the weapons delivered. It is quite possible that some or most of the shipment will be concealed.

The opposition is correct to be concerned about the”dual use” potential of the weapons. Squad weapons, tear gas and non-lethal munitions can be used in peacekeeping but can also be used as instruments of crowd control at home. Given the Fijian Defence Forces history, that is a very real possibility.

The arms shipment could trigger an arms race with Tonga, which also has a military and is a rival of Fiji. The Tongans are not likely to view the shipment kindly even if it does not specifically include naval equipment. Squad weapons can and are used by navies as a matter of routine.

Although Fijian military inventories may well be obsolete, most UN peacekeeping missions are armed by the UN using NATO-standard equipment. That includes small arms and troop carriers used in “blue helmet” operations. Thus the claim that the Russian arms are needed for peacekeeping is debatable at best.

The MOU with Russia also outlines military educational exchanges. These follow on a similar program with the Chinese military (PLA). The Chinese also have funded and undertaken numerous infrastructure projects such as port dredging and road building that have a parallel “dual use” potential: they can be used for civilian and military purposes alike.

Given the above, it is reasonable to speculate that the Chinese and/or Russians may receive forward basing rights in Fiji in the not to distant future. Under the “Looking North” policy Fiji has clearly pivoted away from its traditional Western patrons (Australia, NZ and the US) and towards others that are less concerned about the status of Fijian democracy. Given these weapons transfers plus the bilateral military education and training exercises established with China and Russia, the path is cleared for the two countries to use Fiji as a means of projecting (especially maritime) power in the South Pacific. The Chinese are already doing so, with Chinese naval ships doing regular ports of call in Suva. After years of neglect, the Russian Pacific fleet has resumed long-range patrols. So the stage is set for a deepening of military ties with a basing agreement for one or both. 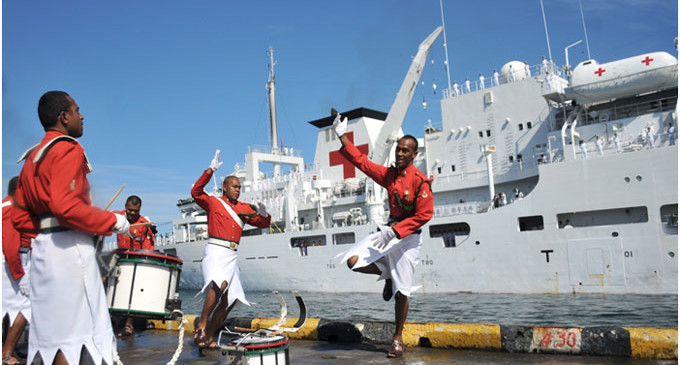 Chinese and Russian bilateral relations are the best they have been in decades. it is therefore possible that they may be working in coordinated, cooperative or complementary fashion when it comes to their overtures to the Fijians. Both seek tourism opportunities as well as preferential access to fisheries in and around Fijian territorial waters, so their non-military interests converge in that regard, which may limit the regional competition between them.

It is clear that post-election Fiji has moved from a “guarded” democracy in which the military acts as a check on civilian government to a soft authoritarian regime in which the executive branch supersedes and subordinates the legislature and judiciary. Some of this is by constitutional design (since the military bureaucratic regime dictated the current constitution prior to the 2014 elections), while other aspects of the slide back towards dictatorship are de facto rather than de jure (such as the speakers’ order to reduce the amount of days parliament can sit. The speaker is a member of the ruling party yet holds a position that is supposed to be apolitical). Then there are the strict restrictions of press freedom and freedom on political participation to consider. Attacks on the Methodist Church, arrests of civil society activists and claims of coup plotting by expats and local associates contribute to concerns about the state of governmental affairs. Add to that the fact that the first Police Commissioner after the election resigned after military interference in his investigation of police officers implicated in torture during the dictatorship, and then was replaced by a military officer (against constitutional guarantees of police and military independence) while the policemen were given military commissions (which insulated them from prosecution thanks to provisions in the 2014 constitution), and one gets the sense that Fiji is now a democracy in name only.

All in all, the outlook is twofold, with one trend a continuation and the other one new. Fiji is once again becoming authoritarian in governance, this time under electoral guise and a facade of constitutionalism. In parallel it has decisively turned away from the West when it comes to its diplomatic and military alignments. This turn is a direct result of the failed sanctions regime imposed on Fiji after the 2006 coup, which was too porous and too shallow to have the impact on Fiji that was hoped for at the time of imposition. The result is a greatly diminished diplomatic influence and leverage on the part of Australia, New Zealand and (to a lesser extent) the US and the rise of China, India and Russia as Fiji’s major diplomatic interlocutors. Factor in Fiji’s disdain for the Pacific Island Forum (PIF) and its continued attempt to fashion the Melanesian Spearhead Group (MSG) as a counter to it, and the makings of a regional transitional moment are clear.

The sum result of this is that the strategic balance in the South Pacific is clearly in flux. Given the US “pivot” to Asia and the reassertion of its security ties with Australia and New Zealand, that is bound to result in increased diplomatic tensions and gamesmanship in the Western Pacific in the years to come.