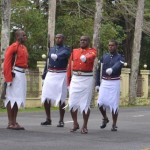 Revelations that the Fijian military-bureaucratic regime has rejected important aspects of the draft constitution submitted by a panel of international jurists led by professor Yash Ghai make clear the intention of the Republic of Fiji Military Forces (RFMF) to continue to play a core role in Fijian politics after the 2014 elections.

That has led observers to question the RFMF’s commitment to democracy, and led some to wonder if the elections will even be held as scheduled. As things stand a constituent assembly selected from a variety of stake-holding groups by current Prime Minister, Commodore Frank Baimimarama, will be convened in March 2013 with a charge to deliver the constitution for ratification by September. Once ratified, that constitution will be the foundational charter under which the September 2014 elections will be held.

There appears to be a consensus amongst foreign observers that the military objections to the draft charter are a sign of its reneging on its promise to restore democratic governance in 2014. Many see this as a sign of bad faith on the part of Commodore Baimimarama and the RFMF. In truth, this view may have neglected what the RFMF had in mind all along when it proposed the 2014 elections and hand-over date. What it had in mind was not a liberal democracy akin to those of its traditional patrons. Instead, what it envisioned, and which it has been pretty honest about when speaking of its vision of Fiji’s political future, is something that emerged in the 1980s and 1990s in Latin America, the Eastern Meditteranean and Southeast Asia: a “protected” or “guarded” democracy as a successor the the military-authoritarian regime. In spite of their socio-cultural and structural differences, post-military authoritarian Turkey, Brazil, Chile and South Korea represent good examples of the phenomena.

The concept is neither new or novel, and the learning curve derived from the precedent of larger countries is clear in the Fijian case. Fijian use of comparative referents is not unusual in any event.

Before detailing the specifics of “guarded” democratic regimes and the future of such in Fiji, it is worth reviewing some basic issues in constitution-drafting. Constitutions basically outline procedural and substantive guarantees. Procedural guarantees refers to the rules of the political “game:” who gets to vote, how they vote, how the votes are counted, who is eligible for office, how voting is apportioned, the duties and responsibilities of government and its respective agencies, the rights are people entitled to in and outside of the political process, etc. Substantive guarantees refer to the privileges accorded citizens: free speech, freedom of thought, association and movement, the right to cultural autonomy and identity, and often much more. Some constitutions are drafted along “minimalist” lines in that they refer mostly to procedural rather than substantive guarantees. Others are more ambitious, detailing substantive rights to education, health, housing, welfare, caloric intake, a role in governance and redress for past injustices. It goes without saying that the latter are harder to implement. In most instances constitutions are a blend of procedural and substantive guarantees, usually with an eye to providing the basic foundations for governance in which the rule of law can apply (and in which substantive guarantees can be negotiated).

Unlike limited democracies, in which the franchise and collective rights are circumscribed, in guarded democracies there are no limitations on individual or collective freedoms, including the right to vote. Nor is the military directly involved in politics. Instead, in a guarded democracy the military serves as an unelected overseer of the political system precisely because it sees itself as an apolitical, autonomous and professional commonweal organization not beholden to partisan interests. Military entrepreneurial activity (in the form of military and state-operated enterprises and public-private partnerships) and bureaucratic entrenchment (what Alain Rouquie called the “colonization” of the state by the armed forces) facilitate the military withdrawal from politics.

Guarded democracies are not military authoritarianism wrapped in civilian garb.

If the civilian government operates within the operational and policy parameters established by the military in the transition to electoral rule, then the military stays in the barracks and out of politics. It is only when civilian authorities are perceived by the military hierarchy to be overstepping their bounds (as defined by the military), that the armed forces as an institution intervene in the political process. This makes the military the power behind the throne and encourages self-limiting behavior on the part of civilian political elites.

Getting the opposition to agree to compete under the constitutional framework and electoral rules of the military regime, and to accept military oversight upon entering government, is a two-step “pact-making” process. Transitions from military-buraucratic regimes often involve implicit or explicit “pacts” between political elites. The first step in the pact-making sequence is agreement amongst opposition factions to compete under military tutelage. The second step is the reaching of agreement between the united (f not unified) political opposition and the military elite on accepting the rules in exchange for the outcome. The opposition agrees to compete under military-imposed conditions and the military agrees to accept the electoral result regardless of who wins. Under those “pacted” conditions the military relinquishes overt control of government while retaining guarantees of its institutional interests.

From its statements the Fijian military regime has been clear in what it expects of the new constitution. First, it expects that the concept of one adult citizen=one vote will apply. Second, it expects that all ethnic and sectoral preferences in politics will be eliminated. Third, it expects that public service autonomy and freedom from political interference will be enshrined in law (ostensibly as an anti-corruption measure but also as a means of ensuring the positions of the numerous military and ex-military appointees hired into the public service over the last six years). Fourth, it expects that the military will be allocated the role of “guardian” of the nation, including oversight and veto power over the policy decisions of elected civilian political authorities. The latter, which is a substantive guarantee to the RFMF, is designed as a check on the demagogic and populist instincts of civilian politicians. Coupled with the pro-military bias of the post-authoritarian public bureaucracy, this limits the effective power of civilian government when it comes to making policy or political choices inimical to the military vision of the “proper” role of civilian elected authority in the Fijian context.

Although there are many specific points of detail in its ideal version, the Baimimarama regime prefers a constitution with a broad procedural minimum and selective substantive guarantees that favor military institutional interests. 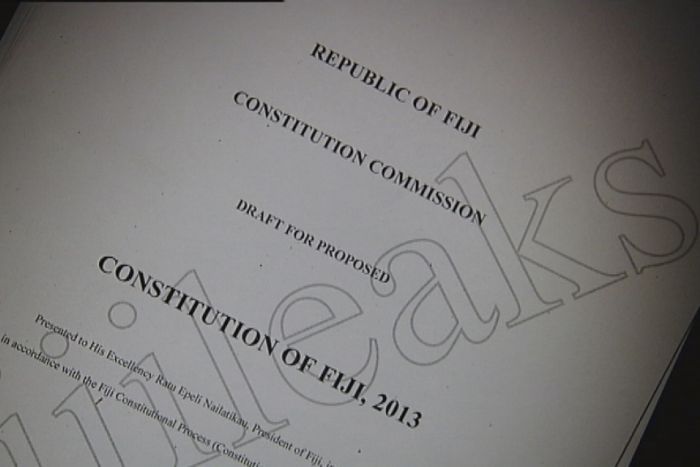 That is why the RFMF has rejected the draft constitution. Due to the tone of the rejection and the often personalized nature of the remarks of military spokespeople with regard to the reasons for the rejection, the regime will not request revisions from the international consitution-drafting committee. Instead, the regime will use offer its own revised constitutional template as the basis for the deliberations of the constituent assembly.  This includes elimination of provisions drafted by the Constitutional Committee that give civil society actors a formal place in political decision-making and agenda-setting, and insertion of military guarantees along the lines mentioned above. The March 2013 date for appointment of the constituent assembly will go ahead on schedule, as will the September 2013 delivery and ratification of the new constitution. Regardless of the concerns of foreign and domestic actors about the nature of the post-authoritarian regime, Commodore Baimimarama and his supporters have the dominant position in the lead-up to these milestones.

The regime’s position is strengthened because large parts of Fijian society support its views on constitutional reform, and it has the support of foreign states, China and Russia in particular, regardless of the final charter or the nature of the post-authoritarian regime. So long as that regime meets its (diplomatic, social and economic) contractual obligations to its supporters and foreign states, it will be seen as legitimate in the eyes of the majority of domestic and foreign actors.

This leaves the domestic opposition as well as foreign states that support a complete transition to elected civilian rule in a quandary. Some foreign actors such as Australia and New Zealand have financially supported the constitutional panel’s draft-making, and have tacitly admitted that the previous sanctions regime imposed on the military authoritarians by a group of Western states has failed.  The domestic opposition has been vocal about its opprobrium of Commodore Baimimarama and his colleagues, seeing no role for them, either individually or institutionally, in the post-authoritarian regime. Yet neither set of actors can play a dominant role in, much less set the terms of the negotiations that will determine the final constitutional draft submitted in September 2013.

In light of these factors, it would seem that the best option for “pro-democracy”  interests to regard the constitution-drafting process and subsequent elections leading to a “guarded” democracy as a step forward towards “genuine” democracy rather than as a reneging on a promise by the Baimimarama regime. Given realities on the ground, adoption of the latter posture will be counter-productive and further alienate the Fijian civil-military coalition from foreign and domestic interlocutors. Adoption of the former stance allows these interlocutors to stay in the game, metaphorically speaking, in order to pursue an incremental gains strategy in which the gradual evolution towards liberal democracy (which includes military subordination to civilian elected authority and institutions) is advanced. That may be a long-term game, but it could well be the only game with a chance of success if success is defined as the end of military guardianship of elected government.

Already, differences in approach are evident between key foreign states. Australia has responded with caution, agreeing with some of the Baimimarama regime’s objections to the draft charter. This appears indicative of an incremental gains approach to the issue of Fijian democratization. New Zealand and Samoa have responded more negatively, arguing that the rejection of the draft constitution is evidence of the military regime’s disinterest in real democratic promotion. The US and other external actors, to include China, India and Russia, have remained largely silent on the matter, which in diplomatic parlance equates to tacit acceptance of the regime’s position.

Foreign non-governmental organizations, including the international union movement, also take a negatively absolutist stance, decrying a dictatorial take-over of the constitution-drafting process. The trouble with the negatively absolutist view is that it offers no incentive structure for the Fijian regime to do anything other than its current course of action. Moreover, the disincentive structure that it favors, sanctions, suspensions and exclusion, simply have not and will not work. Thus those who advocate such a view, be they states or non-state actors, have no leverage in the process. That is why, even if by default or as a second-best option, the incremental gains strategy is the best option for those interested in seeing Fiji progress away from military-authoritarian rule.

Futures Forecast: The Fijian Constitutional Congress will deliver a constitutional draft in 2013 that conforms to the military-authoritarian regime’s preferred vision. This will be ratified and elections leading to the installation of a “guarded” democratic regime will be held in September 2014. The post-authoritarian regime will be recognized as legitimate by the international community. The influence of Commodore Baimimarama and RFDF command will remain pervasive in Fijian politics regardless of whether the Commodore runs for elected office or not.