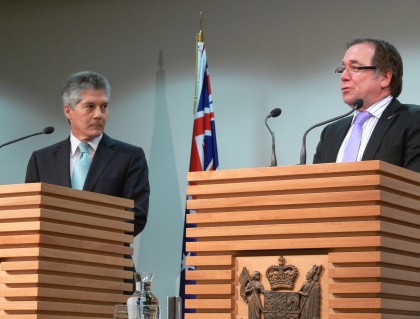 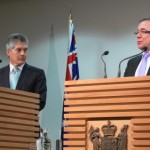 Australia/Solomon Islands/RAMSI: Australia’s Defence Minister Stephen Smith says an exit plan is being developed for the defence contingent of the Regional Assistance Mission to Solomon Islands. Smith is in Honiara and met the Solomons Prime Minister, Gordon Darcy Lilo, where the issue was discussed. Smith says he has also had discussions with the PNG and New Zealand governments who also have defence personnel serving with RAMSI. See, PINA Report.

Solomon Islands: HONIARA, Solomon Islands (Solomon Star) – Australia’s defence minister Stephen Smith is in Honiara today to mark ANZAC Day. ANZAC Day is a national day of remembrance in Australia and New Zealand, originally commemorated by both countries on 25 April every year to honour members of the Australian and New Zealand Army Corps (ANZAC) who fought at Gallipoli in the Ottoman Empire during World War I. See, Island Business Report.

Fiji/Australia: Australian Foreign Minister Bob Carr will be visiting Fiji on Monday as part of the Commonwealth Ministerial Action Group. The Sydney Herald reports that Carr had earlier discussed Fiji’s situation during his first meeting with United States Secretary for State Hillary Clinton. Carr is expected to talk with members of the Fiji government while on his visit to gauge the progress towards planned elections in 2014. See, Fiji Live Report.

Fiji/New Zealand: Foreign Minister Murray McCully will travel to Suva on Monday as a member of the Pacific Islands Forum Ministerial Contact Group on Fiji. Mr McCully today thanked the Fiji administration for its agreement to the MCG visit. “This visit will enable the MCG to resume direct dialogue with Fiji after a significant interval,” Mr McCully said. See, Pacific Scoop Report.

New Zealand: New Zealand Foreign Affairs boss John Allen may be on a collision course with the Government after fresh disquiet among ministry staff that changes to a controversial restructuring plan do not go far enough. In a letter to staff, leaked to Fairfax, Allen confirms he has again pushed back the deadline for final decisions after a backlash over proposals to make 600 staff reapply for roles, slash overseas living allowances, outsource consular services, slash remuneration for some staff depending on their positions, and make hundreds of jobs redundant. He has backed down on several proposals, including roughly halving the number of positions to be axed, after Foreign Minister Murray McCully delivered a thinly veiled warning that some of his proposals went too far… See, PINA Report.

Samoa: The outbreak of typhoid fever among inmates at Tafa’igata Prison has sparked the health sector into action. Ten prisoners were diagnosed with typhoid last week. This prompted the Ministry of Health, the National Health Services and the relevant government ministries to act quicklyto prevent further cases. An emergency meeting was held on Tuesday where the Minister of Health, Tuitama Dr Leao Tuitama, Minister of Police, Sala Fata Pinati and senior officials from the Fire and Emergency Services Authority and Police discussed the issue. See, Pasifika Media Association Report.

French Polynesia: A former French Polynesian president has lodged a complaint about a government-sponsored letter distributed last week which could nullify the results of the first round of the French presidential election. Gaston Tong Sang said the pro-independence leader, Oscar Temaru, violated the law which bans campaigning the day before voters go to the polls. Temaru’s supporters distributed a letter in public places, signed by him, which urged everyone to become an ambassador for his campaign to reinscribe the territory on the UN decolonisation list. See, PINA Report.