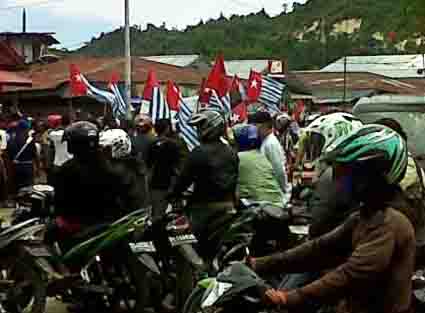 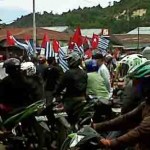 West Papua: More than 400 Bintang Kejora (Morning Star) flags have been flown by scores of people on a demonstration in Tanggal, Serui, West Papua, in dramatic defiance of an Indonesian law banning the public display of the pro-independence ensign. Media sources said the demonstrators were expressing support for the launching of a US branch of International Lawyers for West Papua (ILWP) – spelt out as the International Parliamentarians, not Lawyers – in the United States. However sources on the ground confirmed to West Papua Media that the demostration was carried out by more than 5000 people in support of the Federal Republic of West Papua, and demanded full international legal recognition of Papuan’s desire for independence and to uphold the universal right to self-determination. See, Pacific Scoop Report.

Papua New Guinea: Papua New Guinea’s Prime Minister Peter O’Neill on Saturday rebuffed pressure from Australia to hold elections on time, saying the timing of polls was the Pacific nation’s own business. Canberra has repeatedly called on neighbouring PNG to adhere to the June deadline for elections as set out by its constitution, with Prime Minister Julia Gillard on Friday ratcheting up pressure by contacting O’Neill directly. See, Island Business Report.

Papua New Guinea: PNG’s Prime Minister Peter O’Neill has rebuffed pressure from Australia to hold elections on time. Prime Minister Julia Gillard on Friday ratcheted up pressure by contacting Mr O’Neill directly, but he yesterday said the timing of polls was PNG’s own business.
Canberra has repeatedly called on PNG to adhere to the June deadline for elections as set out by its constitution. See, Malum Nalu Report.

Solomon Islands: Prime Minister Gordon Darcy Lilo last night has responded to Leader of Opposition Dr Derek Sikua in saying the Prime Minister’s work plans are not new. Last week in the Solomon Star Honourable Leader of Opposition Dr Derek Sikua stated that there is nothing new in the PM’s work plans. He stated that prioritised government spending and creating a stable business climate is conventional. Responding to the Opposition Leader, the PM stated that although these are conventional government obligations, some governments are more successful than others depending on the level of discipline and commitment to those principles. See, Solomon Star Report.

Cook Island/Papua New Guinea: The PacificFreedom Forum condemns the brutal attack by uniformed Police officers on PapuaNew Guinea journalist Mark Kayok on the evening of Saturday 21 April, in PortMoresby. Kayok, a Police rounds reporterwith the National Broadcasting Corporation, has reportedly sustained a brokennose amongst his injuries and is currently recovering at home. The incident wasreported in the morning bulletin on NBC radio on Monday 23 April . Kayok hadbeen on assignment on Saturday evening before meeting up with afriend who was wearing his Police uniform. Returning home, they were tailed by a mobile PoliceUnit who stopped them at a service station in 5-mile and began assaulting the Police officer. When Kayok tried to stop the attack, the assailants asked him who he was. He identified himself as an NBC journalist and was also beaten up bythe group of Police officers who told him media were not reporting positivelyon them. See, Pasifika Media Association Report.

Tonga: An Auckland-based Tongan academic’s reporting and analysis of contemporary Tongan provides an agenda for media, opposition and others who should operate the kingdom’s democratic process. The unpleasant reality is that quality media which produce a high level of economic and political analysis is largely absent says the author of Shoot the messenger in her book about Tonga. This absence from state affairs signals that “an old guard attitude refuses to go away”. Dr Teena Brown Pulu says the media’s ability to deliver investigative journalism is fundamental to strengthening civic society and participatory democracy. See, Pacific Media Centre Report.

French Polynesia: The two leading French presidential candidates have scored their best results in overseas constituencies, including the French Pacific. However, 11 overseas constituencies top the list of places with the lowest turnout. The top four electorates for Francois Hollande were overseas, with Wallis and Futuna giving him most support in the Pacific. Nicolas Sarkozy also won big support in the Pacific, with New Caledonia and French Polynesia among his four strongest constituencies. See, PINA Report.

ACP/EU Relations: One of the sore points in African, Caribbean and Pacific (ACP) and European Union (EU) relations is the slow progress on the Economic Partnership Agreement (EPA) negotiations. While the Caribbean region has already finalised its EPA, the African and Pacific regions are yet to do so. ACP Secretary General, Dr Mohamed Ibn Chambas said it’s worrying that the EU is proposing to withdraw Regulation 1528, which guarantees entry for exports from ACP countries by January 2014. See, PINA Report.