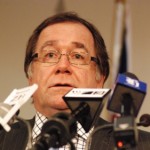 36th Parallel External Report, 21 November 2011 – Conspicuous by its absence from this year’s election campaign is mention of foreign policy. The SAS Afghanistan deployment was brought up once in the first Leaders debate, on Saturday Foreign Minister Murray McCully announced New Zealand’s foreign policy achievements (mostly to do with trade) at the East Asian Summit in Bali (rather than at home), and on Sunday Te Mana stage a publicity event outside SAS Headquarters announcing a foreign policy platform that consists of withdrawing the SAS from Afghanistan, supporting global indigenous rights and easier immigration for Pacific Islanders, and ending all free trade negotiations. Beyond that, the issue of foreign policy is dormant in this election. The lack of attention is surprising given how important foreign relations are to the national well-being. Two examples suffice to underscore this fact.

In the past week New Zealand came a substantial step closer to becoming a front-line security partner of the United States and Australia as well as a founding signatory to the Transpacific Partnership (TPP) on trade. Both of these developments are viewed with considerable distrust by New Zealand’s second largest trading partner, China (and to a lesser extent, Indonesia), so it would seem timely during an election campaign to ponder the substance of the approach that brought these two developments into play.

News that the US will begin to rotate Marines and forward-position aircraft and ships in Western Australia and the Northern Territory as of 2012 has a direct impact on the NZDF and the perception of New Zealand abroad. The recent Defense White Paper published under the National government calls for closer integration of NZDF and Australian forces, and the 2010 Wellington Declaration makes New Zealand a full US security partner for the first time in a quarter century. As Jon Stephenson and Nicky Hagar have uncovered, such close relationships already include working together in foreign theaters on matters of tactical and strategic intelligence as well as military operations, including unwitting facilitation of torture by others and lethal targeting of individuals and groups in countries that New Zealand is not at war with. With the US-Australia announcement on military cooperation, New Zealand been drawn even more tightly into their security orbit. Their wars, in other words, have become our wars.

This runs the risk of the NZDF having to participate in military operations in which no core national interest is at stake or in which ethical and moral considerations are discounted. After all, there is no “opt out” clause in binding security agreements. Moreover, the US-Australian military alliance constitutes part of a larger US strategy of hedging against Chinese power projection by fence-ringing the Western Pacific with revamped and new military-security partnerships as well as a growing US military presence. New Zealand has now become part of that fence-ringing project.

China has openly condemned the US-Australian announcement, and Indonesia has expressed serious reservations about it. Australia has leverage on its largest trading partner, which comes in the form of its mineral exports to China. China needs those economic inputs for sustained growth, so Australia can afford to straddle the fence between its trade and security partners because the Chinese are more dependent on them than the other way around. Likewise, Australia and Indonesia share much in common on matters of geopolitical thought (including a pro-US orientation), so whatever concerns Jakarta may have about the amped up US military presence will not be injurious to the overall tenor of Australia-Indonesian bilateral relations.

Although New Zealand has no direct conflict with Indonesia in the security field, it also has no leverage with China. Milk products, timber and wool are not of the same value to Chinese development as are coal, copper, iron ore and uranium. Thus New Zealand’s security relationship with the ANZUS partners leaves it increasingly exposed to the contrary pressures of the competing great powers with which it is engaged. As strategic competition between the US, Australia and China intensifies in the Western Pacific, there may come a time when New Zealand is no longer able to perform its diplomatic balancing act amongst them. That will not be a happy moment.

President Obama’s announcement at the 2011 APEC meetings that the US will make TPP ratification a priority, added to the news that Japan and Canada will consider joining the nine-nation trading bloc (which does not include China), also poses serious questions for New Zealand. The concept of “free trade” is appealing in principle, but size asymmetries between the signatory economies and concerns about environmental, labour, intellectual property and patent rights make New Zealand’s avid support for the TPP more faith-based than fact-driven. Moreover, the move to so-called open borders also opens the way for unwanted add-ons such as criminal enterprise penetration and industrial and political espionage. None of these “after-entry” issues have been addressed by the TPP negotiators in any significant depth because they are operating off of a NAFTA-inspired framework that is written more as an investor guarantee protocol rather than as a balanced trade agreement. Hence whatever the merits of the TPP, surely they are worth debating during the campaign.

No such thing has occurred. This is largely due to two main factors: 1) basic agreement by Labour and National on the broad contours of foreign policy, which has existed for over a decade; 2) Public preoccupation with immediate issues coupled with ignorance of, and disinterest in, foreign affairs. Added to that is an insulated foreign policy and security elite that plan and steer New Zealand’s international relations given the broad party consensus mentioned above, something that allows the major parties to stake out differences on domestic matters rather than on foreign policy.

Besides the lack of attention paid by the major parties, the minor parties have been mostly silent on matters of international import. This includes the Greens, who have previously been the most ardent defenders of an ethical and human rights based approach to foreign policy as well as the staunchest opponents of militarism and transnational corporate greed. Such collective silence may suit the desires of diplomats and security officials who can continue their activities unhindered by the light of electoral scrutiny, but it hurts public understanding of the issues involved. Stunts like the Mana foreign policy announcement do not do so either.

Other aspects of foreign policy deserve deeper consideration (relations with Fiji and other authoritarian regimes, non-proliferation, bilateral development aid and multilateral peace-keeping, to name a few). However, Labour and National prefer to keep foreign policy as an elite game with little public input because it not only frees them to concentrate on domestic issues, but also allows them to pay lip service to the “independent and neutral” foreign policy mantle under which they operate. Trouble is, New Zealand no longer conducts itself as an independent and autonomous international actor and has pretty much forsaken its role as a champion of international human rights, multilateral conflict resolution and ethical diplomacy. Instead, it now slavishly courts the favour of a disparate and often counterpoised array of larger partners on matters of trade and security without regard to the long-term consequences of that juxtaposed position. That should be of concern to voters.

Instead, personality, party machinations and domestic policy have eclipsed international relations in the campaign. Since New Zealand’s well-being is immediately influenced by international trends, and given the contradictions of its strategic outlook (trade with the East, security with the West), the paucity of campaign discussion leaves voters without the chance to consider foreign policy options and to have a say in charting New Zealand’s international course for the next three years and beyond—times that will see a major realignment of the geostrategic balance in the Pacific.

Given that an informed public is the best guarantee for legitimate policy-making in a democracy, and given that the shadow the future hangs heavily on current foreign policy decisions given the international trends described above, it seems obvious that New Zealand’s international role should be a major source of election debate. Alas, it is not. This is not only inimical to full democratic accountability and transparency, but it is also dangerous because when it comes to international relations and the consequences thereof, ignorance certainly is not bliss.