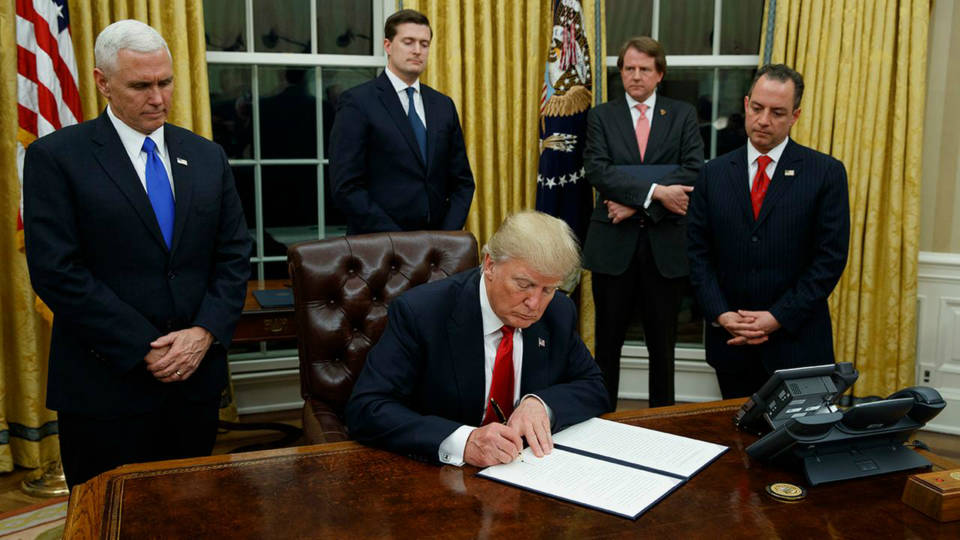 The Trump administration’s decision to withdraw the Trans-Pacific Partnership Agreement, a multinational trade and investment accord involving eleven Pacific Rim countries other than the US, is seen as a blow to hopes for a freer flow of goods and services in the Asia-Pacific Region. In this analytic brief we look at the potential opportunities presented to the non-US TPPA signatories by the US abrogation.

When President Trump signed the executive order withdrawing the US signature from the Trans Pacific Partnership Agreement (TTPA), he signed the death warrant of that multinational trade deal in its present form. The US was the core member of the TPPA and held the dominant negotiating position within it, so the decade-in-the-making, laboriously undertaken and vexing complex compact that was agreed to by the other eleven signatories is now all but null and void.

There are options, however, for the TPPA that may allow it to survive and thrive in light of Trump’s unilateral abrogation.

First, the other eleven member states can put the agreement into hibernation, wait for the 2020 US presidential election and hope that a more trade-oriented president succeeds Trump.

Second, they can hope that the Republican congressional leadership will force Trump to reverse his decision sometime between now and 2020. That would only occur if Trump is weakened by some failure and the GOP sensed that it could re-assert its traditional pro-trade stance at his expense. The Democrats would welcome the move for opportunistic partisan reasons even if some of its leading figures such as Bernie Sanders also oppose the TPPA and applauded Trump’s decision to pull plug on it.

Third, the members could look to themselves and re-draw an agreement that is less US-centric. Many of the provisions insisted on by the US could be reconsidered and even dropped in exchange for increased preferences for the interests of previously junior TPPA partners.

Fourth, the remaining TPPA partners could look to fill the void left by the US with another large market economy. The one that springs immediately to mind is China. That is where things get interesting, and where opportunity may lie.

China is already party to the ASEAN-China Free Trade Agreement (ACFTA) that established a regional free trade area that is the largest in terms of population and third largest in term of trade volume and nominal GDP. Some of the ACFTA signatories are also parties to the TPPA (Brunei, Malaysia, Singapore, Vietnam). This agreement is considered to be a “true” free trade agreement in the Ricardian sense because it reduces tariffs across 7,881 product categories to zero percent, with the result being that tariffs on ASEAN goods sold to China fell to 0.1 percent and those of China sold in ASEAN to 0.1 percent in the year the agreement went into force (2010)

The non-US TPPA members could opt to negotiate an agreement with ACTFA as one course of action. That may be difficult given that the TPPA is not a “genuine” FTA as much as it is an investor guarantee agreement (IGA) in which market regulations are altered to attract foreign investors and these are protected from legal liability in the event of disputes with the host state. What is not included in the TPPA are across-the-board reductions to zero tariff, and in fact many domestic industries remain protected or subsidised throughout the TPPA membership as part of the horse trading undertaken during negotiations over its central tenets. But it may be possible to reconcile the two trade deals in an effort to create a new super trade bloc on neo-Ricardian grounds.

Another option might be to invite China to the table. It has the second largest market in the world and is continues to grow at a sustained and rapid pace in spite of the vicissitudes of the world economy over the last two decades. It is making the transition from export platform to a mixed domestic mass consumption/value-added export model, and it has previously expressed interest in joining the TPPA. The US blocked consideration of China’s membership because it saw the TPPA as the economic equivalent of the military “pivot to Asia” announced by the Obama administration, that is, as a hedge against Chinese economic, diplomatic and military influence in the Western Pacific Rim in what amounts to a new Containment Policy in the Asia-Pacific.

With the US gone, China has an opening and the remaining TPPA members have an opportunity. The TPPA will have to be renegotiated, but it is likely that the non-negotiable provisions insisted by the US will not be supported by the Chinese and can be dropped in the effort to entice their interest. In turn, China might have to accept something less than blanket reductions in uniform tariffs and agree to a tariff reduction regime that is more segmented and scaled in orientation and gradual and incremental in application (i.e. more product or industry specific and phased in over a longer period of time). That is clearly within the realm of possibility, as is Chinese agreement to other TPPA provisions stripped of their US-centric orientation.

China has already signalled its intentions in this regard. President Xi used this year’s Davos Forum to preach the virtues of free trade and global commerce, arguing against protectionism as an impediment to international understanding and exchange. China has proposed the creation of a Regional Comprehensive Economic Partnership (RCEP) along the lines mentioned above with regard to an ACTFA-TPPA merger but with the provision that the US be excluded. There are many details to be ironed out but the groundwork has been laid for that to happen.

What makes the turn to a China-included trade bloc a potentially win-win proposition for remaining TPPA signatories is that the key provisions demanded by the US–changes in market regulations and preferential market entry clauses for US business interests (including changes in patent and copyright protection) and imposition of limited liability clauses in the event US businesses are sued by local governments–were those that were most resisted by domestic audiences in several TPPA member countries. Removing them not only allows the agreement to be free of those constraints but also diffuses a source of domestic opposition in countries where such things matter.

One thing TPPA states should think carefully about, especially small states like New Zealand, is the invitation to negotiate bi-lateral trade deals with the US instead of the TPPA (something just announced by the Trump administration). The historical record shows that large asymmetries in market size favour the larger over the smaller partner in bilateral trade agreements. This is due to economies of scale, market dominance, and economic and geopolitical influence derived from market size advantages. The recent track record of bilateral deals between the US and smaller states reinforces this fact. Australia, South Korea, Chile, Colombia and the Central American nations plus Dominican Republic grouped in the CAFTA scheme all have bilateral FTAs with the US. In all instances the majority benefits accrued to US-based companies and industries and the benefits accrued in the partner states were limited to specific export markets (mostly in primary goods), with little flow-on, trickle down or developmental effects in the broader national economies.

So rather than “jump on a plane” to sign a bilateral deal with the US, as one wag put it, smaller states such as New Zealand need to think hard whether the bilateral alternative with the US is more long-term beneficial than a multilateral agreement, especially when it has shown that under a certain type of administration the US is willing to renege on its commitments even if they are multilateral rather than bilateral in nature. With the Trump administration also set to review and replace the tripartite North American Free Trade Agreement with Canada and Mexico (NAFTA), it is clear that honoring commitments and maintaining continuity in trade policy is not, even if just for the short term, on the US agenda.

When one widens the lens on what the Trump administration is doing in terms of its threats to withdraw from various bi-and multinational defense agreements unless the partner states “pay more” for US protection, it becomes clear that the US is not, at least for now, a reliable international partner.

The reason is that the new US attitude to trade is part of a larger phenomenon. The neo-isolationist protectionism embedded in the “America First” approach adopted by the Trump administration has ended, however temporarily, over 50 years of bipartisan consensus in the US political elite on the merits of international engagement. Be it in trade, foreign aid or collective defense, the US policy elite, both public and private, have embraced globalisation as a means of projecting US power, influence and values world-wide. That era has come to end for the time being, and so long as Trump is successful in pursing his “America First” strategy it will continue to be so.

That may or may not make America Great Again but it could well have a negative impact on those who seek mutual benefit by engaging with it. They will be asked to do more, pay more and offer more concessions in order to be granted US favour.

In the absence of an alternative, that is an unenviable position to be in.

If alternatives are available, then the current moment in US politics provides a window of opportunity to countries that have found themselves marginalised by Trump’s policy directives.

The re-orientation of TPPA is one such opportunity because, if for no other reason, a US return to the TPPA fold in the post-Trump era will see it with much less leverage than it had up until now. Add to that the possibility of increased benefits via a renegotiated deal with the remaining and possibly new partners, and the downside of the US withdrawal seems acceptable.

From a smaller nation perspective, that is a good thing.