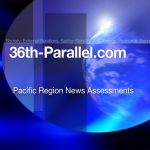 Solomon Islands: Dr Paul Buchanan writes that the Regional Assistance Mission in the Solomon Islands (RAMSI) has begun a transition to indigenous law enforcement. The Royal Solomon Islands Police Force (RSIPF) will be given control of non-lethal weapons and RAMSI’s security component, which once reached 2,200 troops and police officers, will be reduced in future years from its current level of approximately 400 uniformed personnel.

36th-Parallel Forecasts that barring an unforeseen government collapse, the prospects for domestic security over the next few years are good. (See, 36th Parallel Report.)

Melanesia: Police Commissioners of the Melanesian Spearhead Group (MSG) have been urged to construct a law enforcement MSG legion resolute to the demand of their people and to resolve issues the Melanesian way and without outside interference. This call was made by Fiji’s acting Minister for Defence, National Security and Immigration, Colonel Samuela Saumatua at the official opening of the 2nd Police Commissioner’s Conference at the Fiji Police Headquarters in Suva. (See, PINA Report.)

Fiji: An independent body will now elect Fiji’s president after the Great Council of Chiefs (GCC) was abolished by the Bainimarama government. This was announced by Commodore Bainimarama yesterday: “There’s a proportional representation in the charter and it’s also one of the issues that’s now negotiable but whether we go for an elected president, I don’t know yet,” said Commodore Bainimarama. (See, PINA Report.)

Fiji: SUVA (Fiji Broadcasting Corporation / Pacific Media Watch): Fiji must find a way to keep the military out of politics if it wants its economy to thrive to its full potential, says the University of the South Pacific’s economics professor Dr Biman Prasad. Prasad said the involvement of the military had seen Fiji fall victim to four coups and the abrogation of two constitutions. (See, Pacific Media Centre Report.)

French Polynesia: French Polynesia’s pro-independence member of the French Senate has been charged with forgery. The charges, which he denies, have been laid in Tahiti and relate to his work as a lawyer between 2006 and 2009. Walter Zweifel reports: “Richard Tuheiava says since his election to the Senate, he has become the man to be brought down, alleging that this legal action is a political move guided by Paris. He claims that the case is rigged and aimed at discrediting him because he has become too embarrassing for the French state.” (See, Pasifika News Association Report.)

Auckland, New Zealand: The 2012 ASB Polyfest this week is being touted as the biggest gathering of Polynesians on earth. In its 37th year, this annual event is the largest Māori and Pacific Islands cultural festival in the world – attracting 195 school-based performance groups, some 9500 performers and an estimated 95,000. The four-day festival will climax tomorrow with passion, culture, colour and creativity at the Manukau Sports Bowl. (See, Pacific Scoop Report.)