The Port of Beirut warehouse explosion, involving 2.7 kilotons of highly explosive ammonium nitrate negligently stored in an unsecured area, crystalizes in one national tragedy a much wider trend: the crisis and decline of democratic governance world-wide.

For a decade Lebanon has been gripped by a terminal national malaise. Its political system, a type of consociational democracy involving power-sharing agreements among key ethnic and partisan groups, has degenerated into a kleptocracy where politics is used as a means of individual and partisan enrichment.

Corruption is pervasive and endemic at all political levels, public services have ground to a halt (and replaced by organised crime-controlled service provision such as rubbish collection and disposal), the legal economy has shrunk while the black market economy has grown, the national currency has lost 90 percent of its value in one year, the rule of law is honored in the breach and demonstrations against the government and clashes between ethnic and partisan groups are regular and widespread.

The country is home to thousands of refugees and ideological extremists fleeing from and with connection to war-ravaged neighbours and it is hard-pressed to provide relief to the former and impose controls on the latter. There is a phrase for the condition of nation-states that exhibit such symptoms: organic crisis.

Before the explosion came the Covid 19 pandemic. Within weeks of its arrival Lebanese hospitals were at full occupancy and supplies of essential equipment were stretched thin not only because of a lack of supply given increased demand, but because corruption found its way into the supply chain. Then came the explosion, which not only delivered scores of dead, dying and injured to these hospitals but effectively destroyed those closest to the blast. 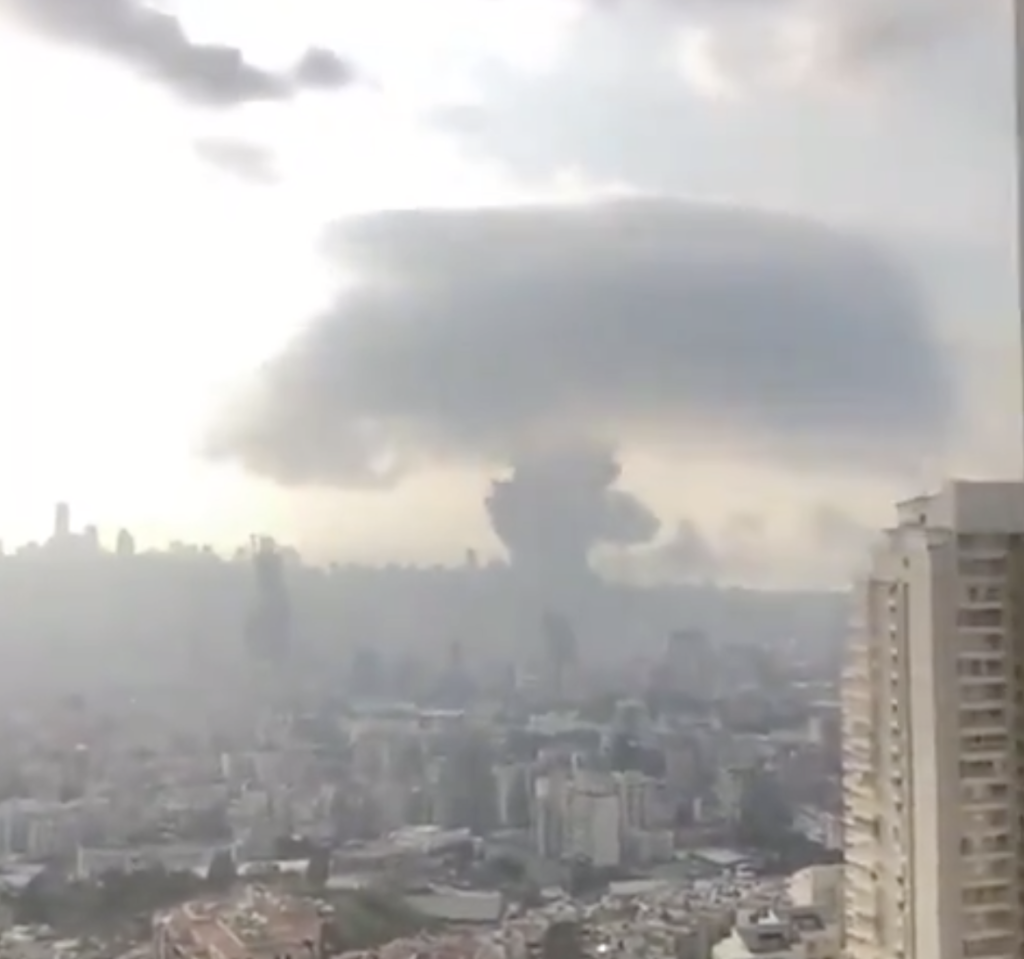 Not surprisingly public anger has spilled into the streets amid calls for a “revolution.” People demand an end to politics as usual and a turn to strong central authority that will shake the parasites and opportunists out of the Lebanese social fabric. This resembles the circumstances that led to the election of Rodrigo Duterte in the Philippines prior to the pandemic and without the explosive precipitant. Both reflect a larger trend, that being disaffection with democratic governance and rising support for authoritarianism on a world scale. That has not gone unnoticed.

Since the advent of the Covid-19 pandemic a number of political leaders have used it as an excuse to impose national emergency measures in order to consolidate and entrench their power. Dutarte, Viktor Orban, Aleksandr Lukashenko, Recep Erdogan, Naendra Modi, Nicolas Maduro, Jair Bolsonaro and even Donald Trump have all succumbed to the “authoritarian temptation:” find an external reason to restrict checks and balances on Executive power for self-serving purposes.

Sometimes the authoritarian gambit works, sometimes it does not. Depending on their initial approach to the pandemic, leaders who have used it to justify a consolidation of their power have had mixed results. Duterte has successfully used the pandemic to his advantage. Bolsonaro, Trump and Lukashenko have suffered politically because they initially denied that the pandemic was serious, and now their claims about health matters are viewed skeptically along with their reasons for more Executive authority. Either way, the pandemic is more than just an excuse to go authoritarian.

It has exposed a global crisis of governance, particularly in democratic countries. The crisis is at once a health crisis, a political crisis and an economic crisis. Leadership incompetence has been revealed to be widespread on all three dimensions, which has undermined public support for democratic capitalism as the preferred political-economic form. Although authoritarians have a mixed record when it comes to pandemic control (think People’s Republic of China and Russia versus Singapore and Viet Nam), democracies have seen its most politically destabilising effects because the backdrop to the current moment has been long in the making. That is evident in global research surveys over the last decade, which show that support for democracy has steadily declined world wide, and is particularly notable amongst the young (under 35) demographic. In long standing liberal democracies as well as relatively new democracies in Latin America and Africa, support for democracy has eroded considerably across all demographics to the point that in some sectors of society less than 50 percent believe it is the best type of governance.

Not surprisingly, in the last year the number of democracies in the world fell below the number of autocracies for the first time in three decades. On pretty much every discernible measure–press freedom, party competition, government transparency, rights of speech and movement, etc.–authoritarians have exploited the so-called “democratic deficit” by clamping down on basic rights and freedoms. The difference this time around is that the current crop of strongmen enter into office via elections and then, like the European fascists of 90 years ago, slowly dismantle the apparatuses of democratic governance in favour of centralized top-down control. The pandemic was just another reason to do so.

Why does authoritarianism seem preferable to democracy? The short answer is that democracies no longer deliver on their promises. Economic prosperity has stagnated in the liberal and newly democratic world, exposing the contradiction inherent in the current phase of globalised capitalism that benefits elites but which does little for voting masses  who clamour for something different when it comes to economic opportunity, security and inter-generational prosperity. Violent protracted riots in places as disparate as France and Chile demonstrate the depth of resentment against the system as given. For many, the general condition is one of of uncertainty and precariousness. People can no longer assume that they will keep a stable job and provide for their own needs, much less guarantee the future of their children.

Many democracies have also lost their consensual, centrist nature and are increasingly rendered by partisanship, zero-sum political logics, “to the winner go the spoils” approaches, pervasive corruption (both institutional and personal) and social as well as political polarization that when taken together mark a general degeneration into political sclerosis. Even so, modern democratic elites can still manipulate in very sophisticated ways (via mainstream and social media as well as direct influence operations like lobbying) the political narrative that supports adherence to and support for the status quo. The sum effect is what is known as “gas-lighting:” the official narrative contradicts the experiential reality of most people, making them question their own interpretations and comprehension of social reality.

But the cracks in this facade are showing. The spectre of uncertainty looms over the voting population because they no longer see a direct relationship between their vote and a change in their material circumstances no matter how much elected authorities tell them that life is good and will get better. That is why apathy has taken strong root as well. If all politicians are cut from the same cloth and one’s situation remains the same or continues to worsen, what is the point of choosing between them?

The disconnect between how people live and what dominant political elites say are the realities of their collective condition is increasingly irreconcilable. The credibility gap is covered in a layer of falsehoods involving fear-mongering, culture wars, false promises, scapegoating of “others” and the like. Whatever the narrative, democratic politics is increasingly seen as a field for scoundrels, charlatans and venal opportunists, not people of principle.

Nowhere is this more evident than in the rise of national populism as a revamped form of authoritarianism. It has degrees of hardness, but the (often xenophobic or racist) appeal to an “in-group” along economic and political lines, in which the leader self-proclaims to be the “saviour” of the nation, is a common thread running through all of its variations. Time and time again, from Russia to Turkey to the UK, leaders go for the politics of exclusionary nationalism rather than for the big tent approach.

In effect, the turn to authoritarianism has it roots in poor democratic governance. Authoritarians can promise certainty instead of uncertainty, consistency instead of chaos (certainly with regards to repression), and efficiency over inefficiency in implementing public policy. Of course they may not keep their promises and may just be as inept as various democracies when it comes to dealing with the pandemic crisis and other tests of government competence, but they make no pretence to being fair, just or equitable. They simply identify those who support them and those who do not and develop policy responses accordingly. Of that people can be sure.

Whatever its short-term appeal, authoritarianism is not a long-term panacea because autocrats may perform no better than the discredited democrats and could well fall as a result, only to be replaced by other authoritarians. Plus, there are enough democracies that have done well in recent times, including NZ, Uruguay, Canada to some extent, Ireland, Portugal, the Nordic tier, Iceland and Finland, to suggest that it is not the end of days for this political form and that it offers an alternative to the dictatorial impulses so prevalent today. But these are certainly trying times for democracy nevertheless.

In the end, the pandemic has exposed what was evident all along. The  model of accumulation (global capitalism in its current phase) and the crisis of governance in the democratic world was a combination bound to prove unsustainable on one, the other or both fronts. The pandemic has just rendered transparent that fact, and the turn to authoritarianism is just a symptom of, not a solution to, that problem.

For analysts the important thing to understand that the rise of modern-day authoritarianism is actually a reflection of the crisis of democratic governance, and that the  crisis is born from within even if abetted from without (say, by electoral meddling by foreign powers). The solution therefore also lies within. But for that to happen, democratic elites must engage in some reflection and reformation. Like the drunk who has an epiphany after a bender, the moment of sobriety starts with an admission of failure and a drastic change of behaviour.

It remains to be seen if contemporary democracies can and will sober up.