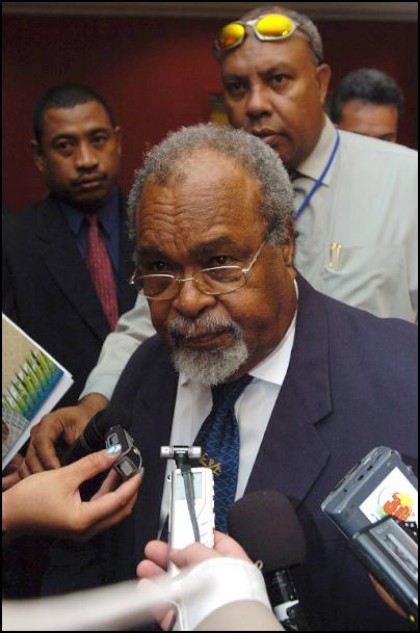 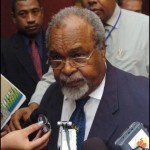 Papua New Guinea: Grand Chief Sir Michael Somare has called the deferral of the general election by parliament “a crime against the people of Papua New Guinea”. “No parliament since Independence has used its numbers to buy more time in office than these desperate 63 members of parliament who voted for the deferral of the election. I commend the minority of 11 that voted against the motion,” Sir Michael said. “We have predicted all along that this regime will eventually defer the election. Its ability to cajole the people of Papua New Guinea is without match in our history.” See, PINA Report.

Papua New Guinea: Hundreds of students in Port Moresby are preparing to march on Papua New Guinea’s government district to protest parliament’s vote to defer elections by six months. Tuesday’s protest comes hours after Prime Minister Peter O’Neill proposed to hold elections on time, but with election writs to be issued a month late to allow for greater public scrutiny of the rolls. The proposal comes amid reports of fighting and gunshots in the Port Moresby suburb of Koki, however police said these incidents are not related to the political protest. See, PINA Report.

Fiji: Only 30 per cent of Nadi shops are open today and most are only selling flood damaged goods. Dr Ram Raju, president of the Nadi Business Chamber of Commerce and Industry, said there is a need for the government and other stakeholders to fast-track rehabilitation work in the town if they are to avert a disaster again in the area. Dr Raju fears the recent flood damage to Nadi town, coming so soon after the January floods, could be enough to push some to close their businesses for good. See, FijiLive Report.

Vanuatu: There is uncertainty in Vanuatu over this year’s election date which had earlier been advised as 30 October. The electoral office says it received instructions from the office of the prime minister to retract it because no date has been officially approved and gazetted by the president. Two months ago, the acting Principal Electoral Officer Guilain Malessas said the election date was October the 30th and that it had been endorsed by the government. See, PINA Report.

New Zealand/USA: US Troops join New Zealand Military Exercise – Defence Minister Dr Jonathan Coleman has announced that the New Zealand Defence Force is hosting United States military personnel in an exercise to be held in the central North Island later this month. 35 US Marines and 41 US Army personnel will participate alongside New Zealand forces in Exercise Alam Halfa starting on 26 April. The US personnel will exercise with members of the New Zealand Army’s 1st Brigade. “This cooperation builds on a pattern of exercises involving New Zealand and US personnel since the signing of the Wellington Declaration in November 2010,” says Dr Coleman. See, Scoop Report.

Niue: Niue signed the Comprehensive Nuclear-Test-Ban Treaty (CTBT) today, becoming the 183rd country to do so. Tibor Tóth, Executive Secretary of the Preparatory Commission for the Comprehensive Nuclear-Test-Ban Treaty Organization (CTBTO), said: “I welcome Niue to the CTBT family of nations. Niue’s signature of the CTBT consolidates the Pacific region’s firm stand against nuclear testing and closes the door on nuclear testing a bit further. I also hope that this step will serve to encourage other Pacific Island States that have not yet done so to sign and or ratifiy the Treaty at the earliest opportunity.” See, Pacific Scoop Report.

North Korea: North Korea is poised to complete preparations for its rocket launch scheduled for later this week, an official said in Pyongyang. A satellite will be installed on the Unha-3 rocket by the end of Tuesday, the official told foreign journalists in a rare press conference. The official dismissed concerns that the launch was a cover for developing missile technology as “nonsense”. See, BBC Asia Report.

Samoa: Recommended solution: a stamp tax program
By Fili Sagapolutele – A local feasibility study of a cigarette tax stamp program in American Samoa estimated that some 5 million cigarettes were smuggled into the territory two years ago, resulting in a loss of more than $700,000 to ASG in excise tax revenues. The 28-page study released last August, prepared by consultant Bryan M. Jackson, was commissioned by the American Samoa Community Cancer Network following a May 2011 Territorial Audit Office report, which found that cigarettes were likely being smuggled into American Samoa, and that as a result ASG was losing a significant of amount of cigarette excise tax revenue each year. See, Samoa News Report.